Whenever I would tell people I was leaving to study abroad and live in Sydney, Australia for six months, they would always ask me if I was nervous.  My answer?  Nope!  I’m not sure if it was because I had already moved 2,000 miles from Seattle to San Diego by myself two years prior or because I was so confident that I would feel at home in Sydney, but a feeling of nervousness was something I totally lacked.  After all, everyone I had ever met that had gone to or lived in Australia for a period of time had always ranted to me about how great it was and how friendly the people were.  And of course, they would all tell me about how I would love it.  Honestly, my biggest fear about flying across the world by myself was missing my flight.  Spoiler alert: I didn’t miss it. In all actuality, it went way smoother than anticipated.  My flight from Seattle to Los Angeles I sat next to a 30 year old woman from Melbourne, Australia that chatted my ear off the entire time – all the while making me more and more excited for my final destination. What’s more, during my hour layover I met a man (also from Melbourne) at a restaurant bar top.  He of course offered up his place to stay if I ever so chose to come adventure down there – people don’t kid about how welcoming Australians are.  And my 15 hour flight from Los Angeles to Sydney?  I lucked out and sat next to two young adults also preparing to spend the semester studying there.  Oh, and I got two free meals (that were surprisingly good), complimentary wine, free movies, and a lot of sleep on the plane.  My six months down under were off to a great start! 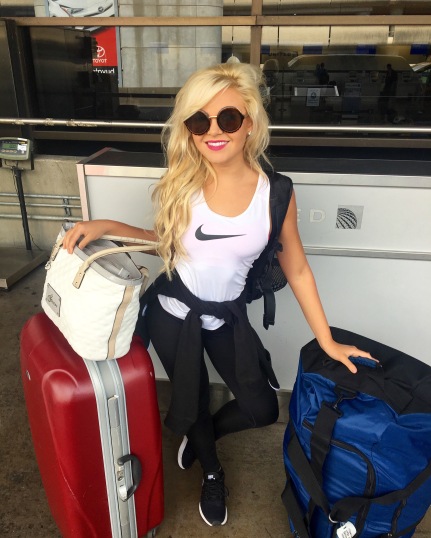 © Megan Napolitan and blondiedownunder.com, 2018. Unauthorized use and/or duplication of this material without express and written permission from this site’s author and/or owner is strictly prohibited.